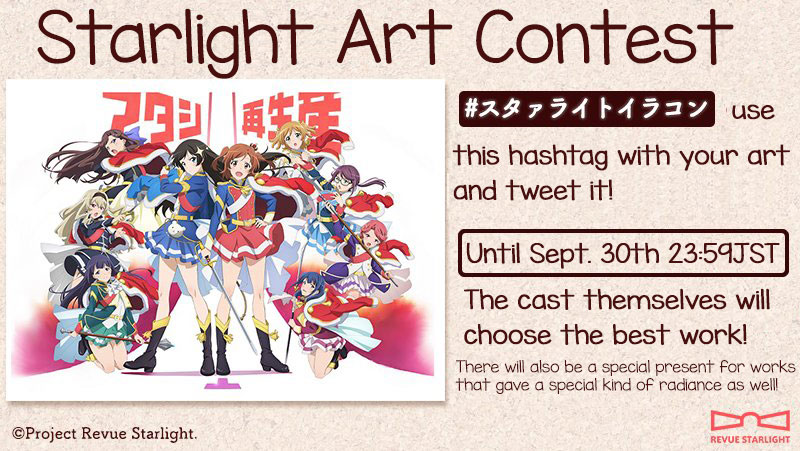 The art contest for Revue Starlight has been decided! Draw your favorite Stage Girls and join the contest! The each of the 9 main cast will be choosing one work!

【How to Apply - Requirements】

Please use your own Twitter account and tweet your illustrations with the #スタァライトイラコン hashtag! Once the period is over, the 9 main cast will each choose the most radiant works!

・Please make sure to apply your own illustrations. Applying other people's work is forbidden.

・The winners will be announced via the Official Shoujo☆Kageki Revue Starlight Twitter.

One for each character.

** Signed shikishi from the cast who had chosen your artwork.

・If you participate on this project, we assume that you agree with these points to note, including the application guidelines

・The name used by the winners' Twitter accounts will be published on public sites such as Bushiroad and other related company websites and social media accounts.

・The works that are considered under Bushiroad Co., Ltd. (also known as official artwork) will not be accepted. To the case that a work was given an award and was later discovered to have been a work considered Official by Bushiroad, the award will be withdrawn.

Works that are not allowed to be submitted are:

〇 Others that goes against public order and morals, the works which are not relevant to the project.

※These rules also include the name registered on the applicant's Twitter and the tweets.

・If you delete the tweet during the application period, it will be excluded from the selection.

・The winners must not claim copyright to their applied works.

・Regarding address and contact information for dispatching the prizes to the winners, we will inform you by using "Shoujo☆Kageki Revue Starlight" official Twitter via DM. The information sent will be only used to send the prize. For more details, please refer to Personal Information Protection Policy of Bushiroad Co., Ltd.(https://bushiroad.co.jp/privacy)

・We may cancel this project for unavoidable reasons

・Bushiroad Co., Ltd. will not be liable for damages due to participation in this project

・Bushiroad Co., Ltd. do not have responsibilities if there is a conflict between participants or a third party in this project